The 2011 dig made a significant contribution to the archaeological data, revealing interesting and tantalising finds, extending the wall found in the previous year and finding another.  Other finds included late medieval pottery, 2 skulls and some teeth which, after analysis, were found to be human.   The good weather and the high volunteer participation, including the children from Castleton Primary School, meant that a lot was accomplished to inspire further work in 2012.  Read the full account in Archaeological Update 2011 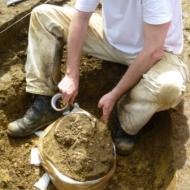 Removing skull embedded in soil to be sent for analysis. 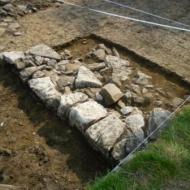 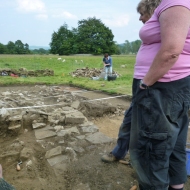 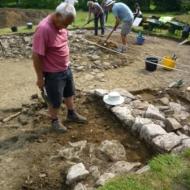 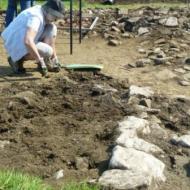 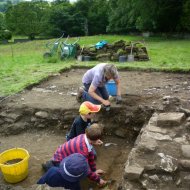 Pottery Roadshow 2011. Chris Cumberpatch, a well-known local expert in identifying and dating pottery, spent the morning in Castleton at the Methodist Chapel identifying pieces of pottery brought along by local residents. He also brought along examples of his own medieval pottery to illustrate the kinds of shards that volunteers might hope to find when working on the Medieval Hospital project. 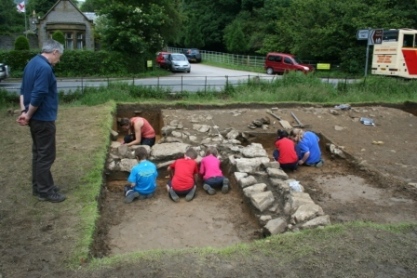 June & July 2012 were remarkable for the amount of water that fell from the skies.  The dig was interrupted by often ferocious downpours. Despite efforts to protect the trenches from the rain, work began on several days by bailing out water for up to 2 hours, only to discover that the previous day’s trowelling was ruined.  To make up for lost time, the dig was extended for an extra two weeks. 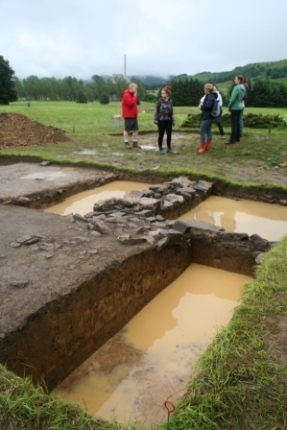 Interesting small finds this year were a lot of rusty nails and lead, and some human finger bones found close to a “cut” in the natural clay that might indicate foundations that have been completely robbed out of stone.  In addition, burnt areas were found, one of which was then sectioned and found to have lead spill around its perimeter, as well as a piece of worked lead emerging from the section. This might represent melting down of lead from hospital-related buildings nearby.

The dig of 2013 concluded with some very interesting findings. On the scheduled monument in Spital Field a well preserved human skull was found (unfortunately the top of the cranium was damaged by a spade) and then at least two “burial cuts”. These were aligned east – west and on one of them finger bones could be seen in the position of the pelvis, indicating that they were Christian burials. Combined with the finding of hearths containing molten lead and twisted pieces of medieval lead came (from stained glass windows) in 2012, evidence is accumulating that suggests our hospital was somewhere close by. 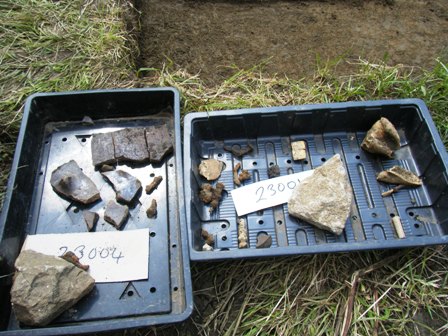 Detailed account of the work and more photos can be found here in the Archaeology pages of the CHS Blog.

Four weeks of archaeology produced some exciting findings on the Spital Field.  This year the focus was on investigating the possible burials discovered in 2013 in more detail and extending the area around them.  Read the full report below for details of a very significant dig.

We still don’t know where the hospital buildings themselves were, but with this year’s exciting findings we may be a lot closer to locating them…….  Perhaps the very deep drain (Lee’s drain) and adjacent line of stone also discovered on the Spital Field this year could be linked to a medieval building? 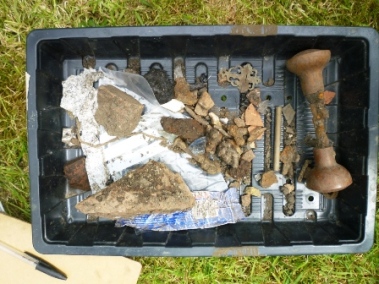 Finds from a test pit

A drain to dye for, further developments at the burial site and a lovely flint. Spital Field yields a few more hints of the past.  Possibly the most promising finds (apart from the telegraph pole insulators) from the first two weeks are two pieces of worked gritstone with distinctive mouldings – perhaps from a high status building? 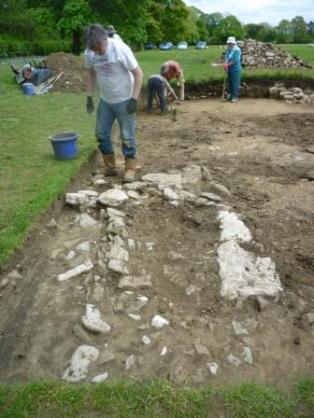 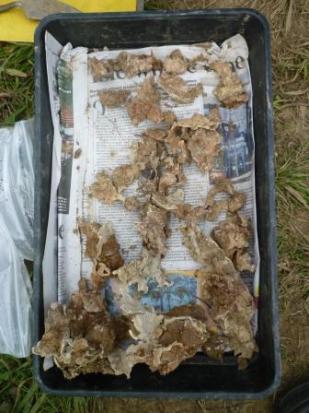 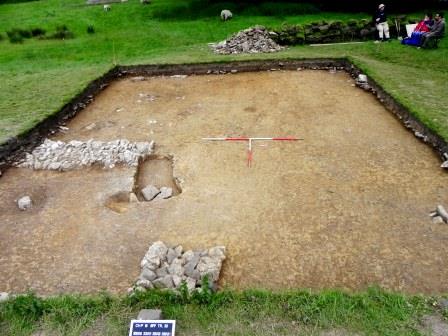